We use cookies to ensure that we give you the best experience on our website. If you continue to use this site we will assume that you are happy with it.

When you decide to build a mobile application, whether it’s a simple trivia game or an enterprise-level CRM, you will have to make several crucial decisions. iOS or Android? An MVP or a full-scale project? Custom or out-of-the-box? The answers you give to these questions will define how your app will function and the amount of resources you should allocate to its development.

One of these vital choices is the decision between native or cross-platform development. A lot of big companies like Google and Airbnb have already made their choice in favor of the second option. However, that doesn’t mean it’s an easy decision to make. Everything depends on what you want to build. We will compare cross-platform and native development approaches below to help you tell what will suit your project best.

Before we start analyzing these two approaches, let’s take a closer look at the mobile development market in terms of what platforms people use, what they download, and how much money mobile apps make. 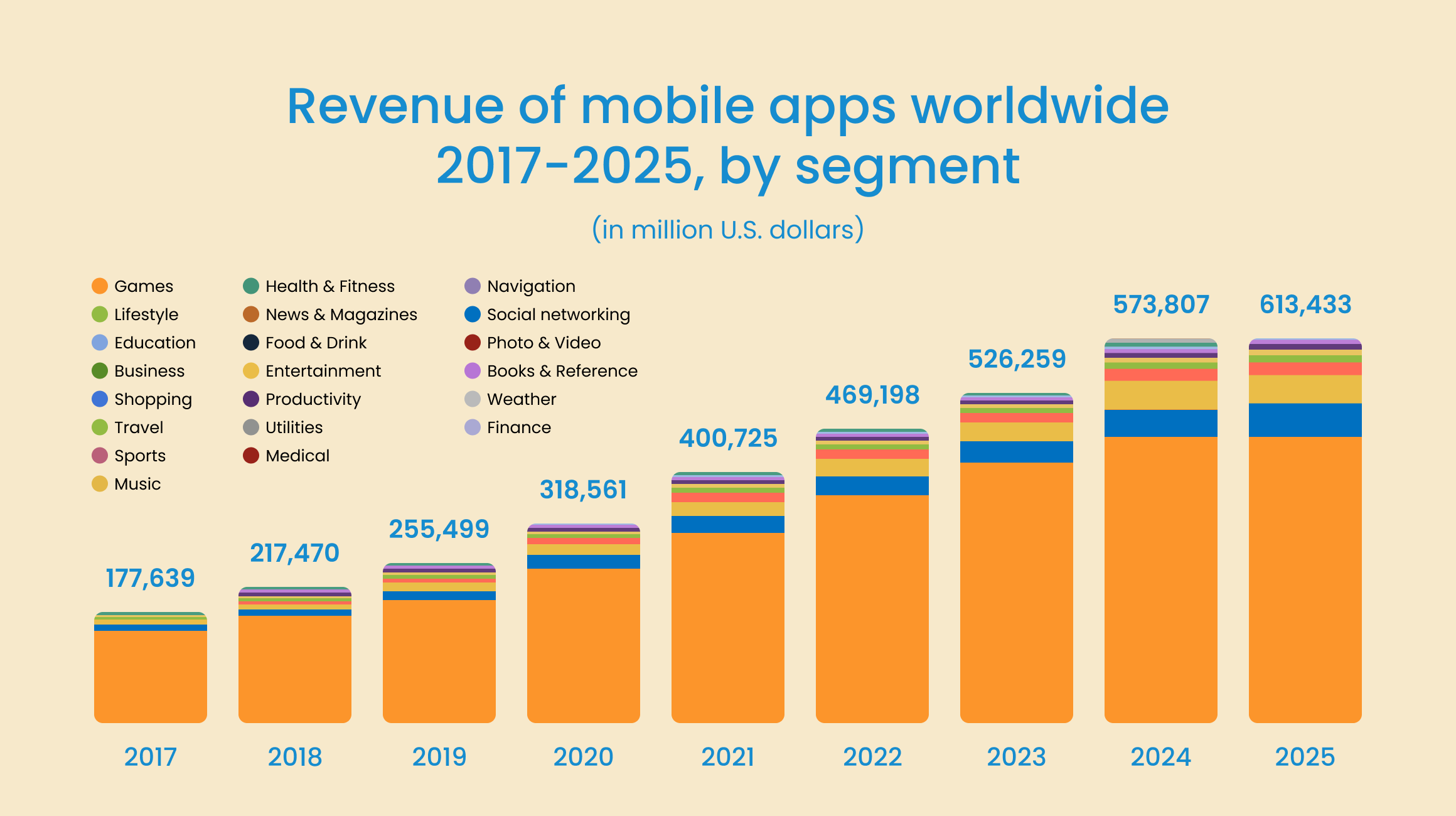 Now that you know mobile development, can be a fruitful investment opportunity in a general sense, let’s move on to the main point of this article, comparing native apps with cross-platform ones.

What is native mobile app development?

Let’s start by defining native development. In a nutshell, a native application is an app developed for use on one specific platform. The tools and languages are specific to the platform (Swift and Objective-C for iOS, Kotlin and Java for Android) so the app’s code cannot be used on other devices. 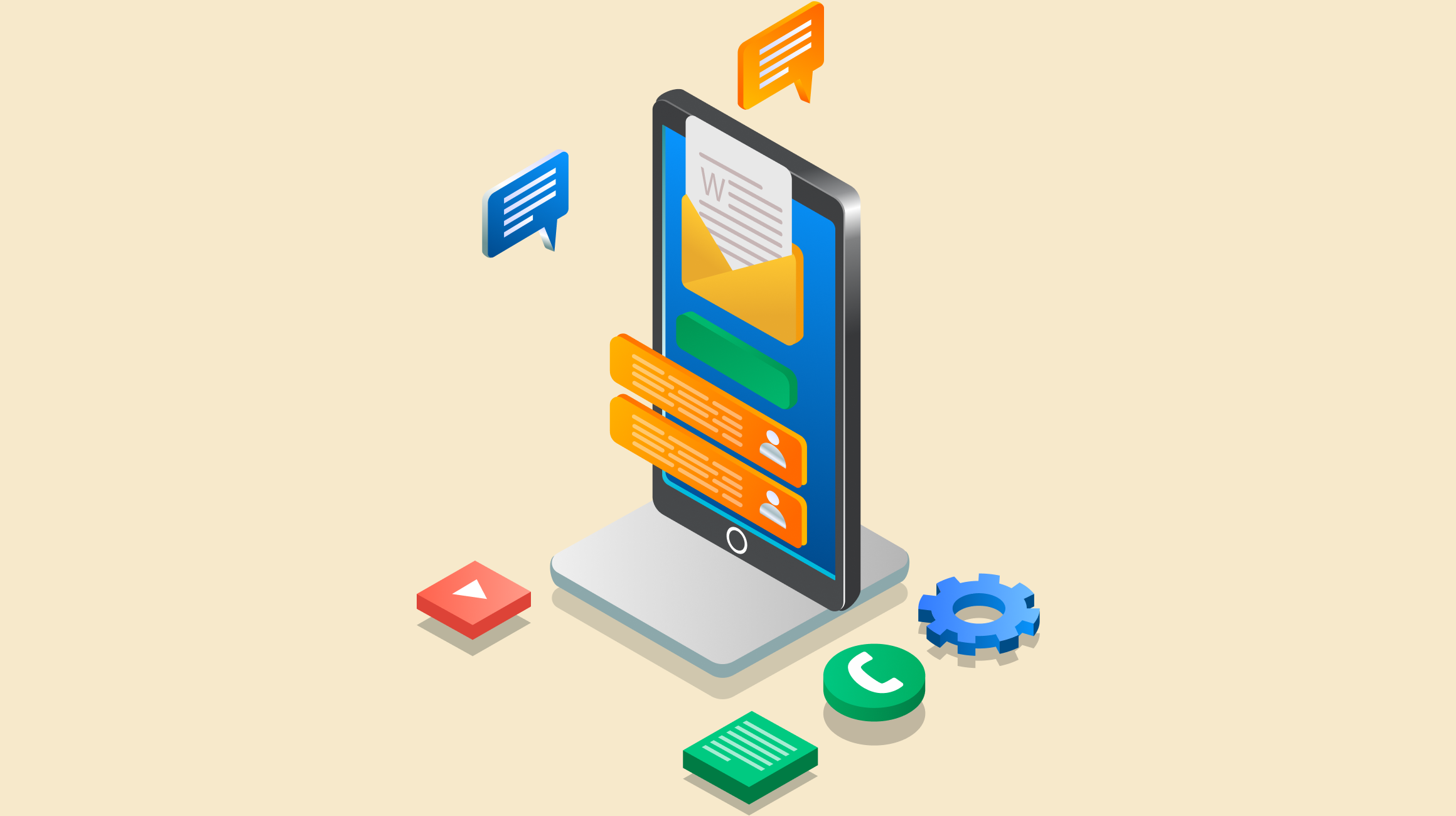 Both Apple and Google provide developers with extensive toolsets for creating native apps. For example, you can get access to standard UI elements, design guidelines, and working environments, which makes native mobile app development for iOS or Android easier.

Next, let’s dive deeper into the pros and cons of native apps.

The most prominent benefits of native mobile app development include the following. 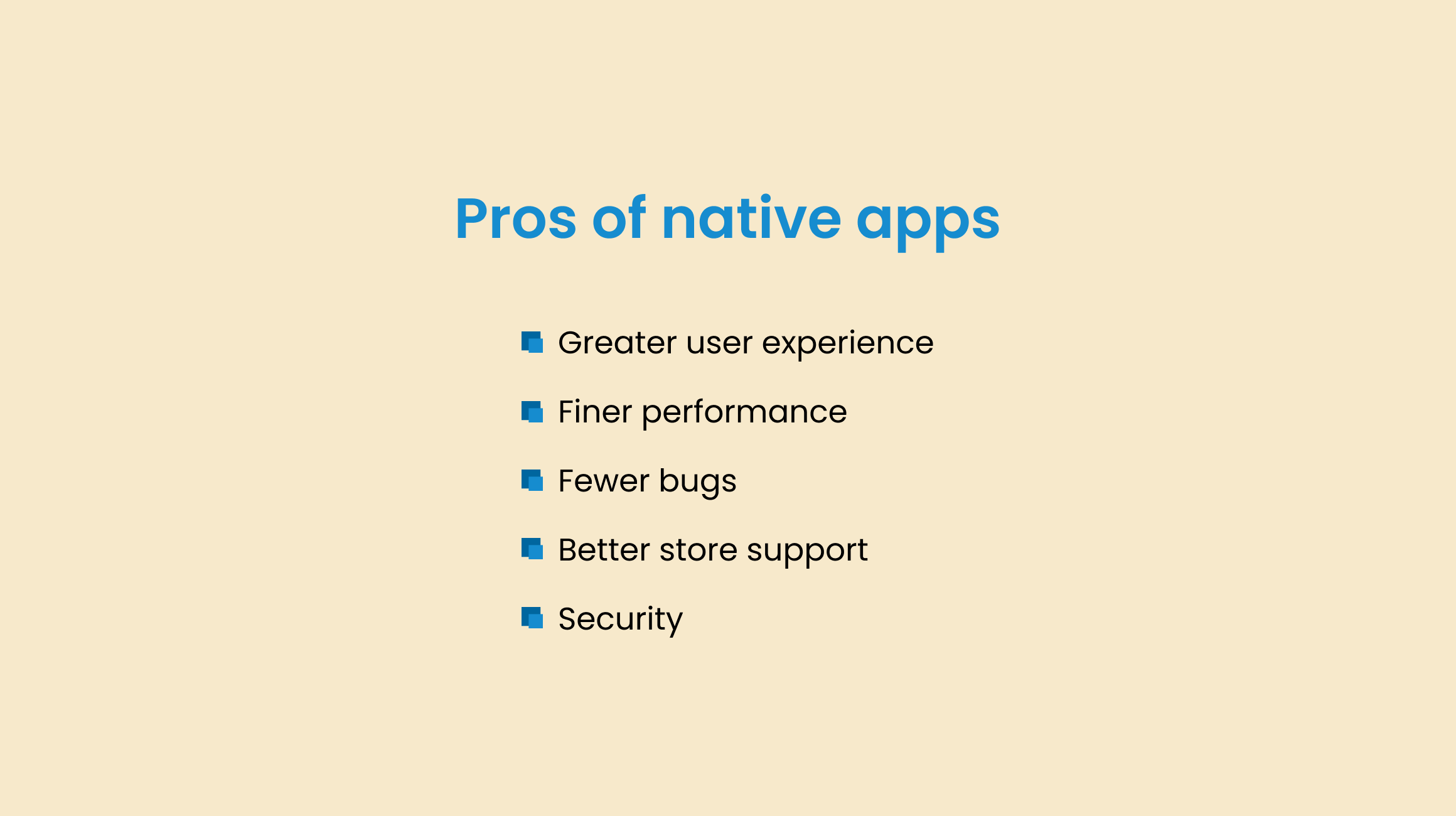 Since you create the app for one particular platform, it’s easier to optimize your solution to address users’ needs. All the standards are specifically tailored to the requirements of the platform, so your application will not feel alien or odd on any users’ devices. As a result, native apps provide an exceptional user experience.

The same standards that improve user experience also positively impact the app’s performance. A native app is made with the help of the tools and languages that the platform understands best, thus performance is consistently outstanding. The apps are responsive, fast, and completely optimized for the devices they are installed on.

Since native apps don’t require additional dependencies and bridges to function, they tend to have fewer bugs than cross-platform ones. In addition, developers work with the most recent versions of SDKs while creating native apps, allowing them to implement the newest features that the platform can support. The only thing a user needs to do to access them is update their OS.

Usually, native apps get to the store faster and are listed higher. This is a result of the previous points: better performance, great UX, and generally lower numbers of bugs that cause issues such as lagging and freezing. This gives you a greater chance of getting noticed by your target audience.

In terms of security, native apps are more reliable. They have built-in security tools that facilitate implementing data encryption, fraud detection, and other security measures. This benefit is especially relevant for business areas that deal with customers’ private and sensitive information including e-commerce, financial institutions, blockchain, and healthcare.

What are the cons of native apps?

Native development has its own downsides. 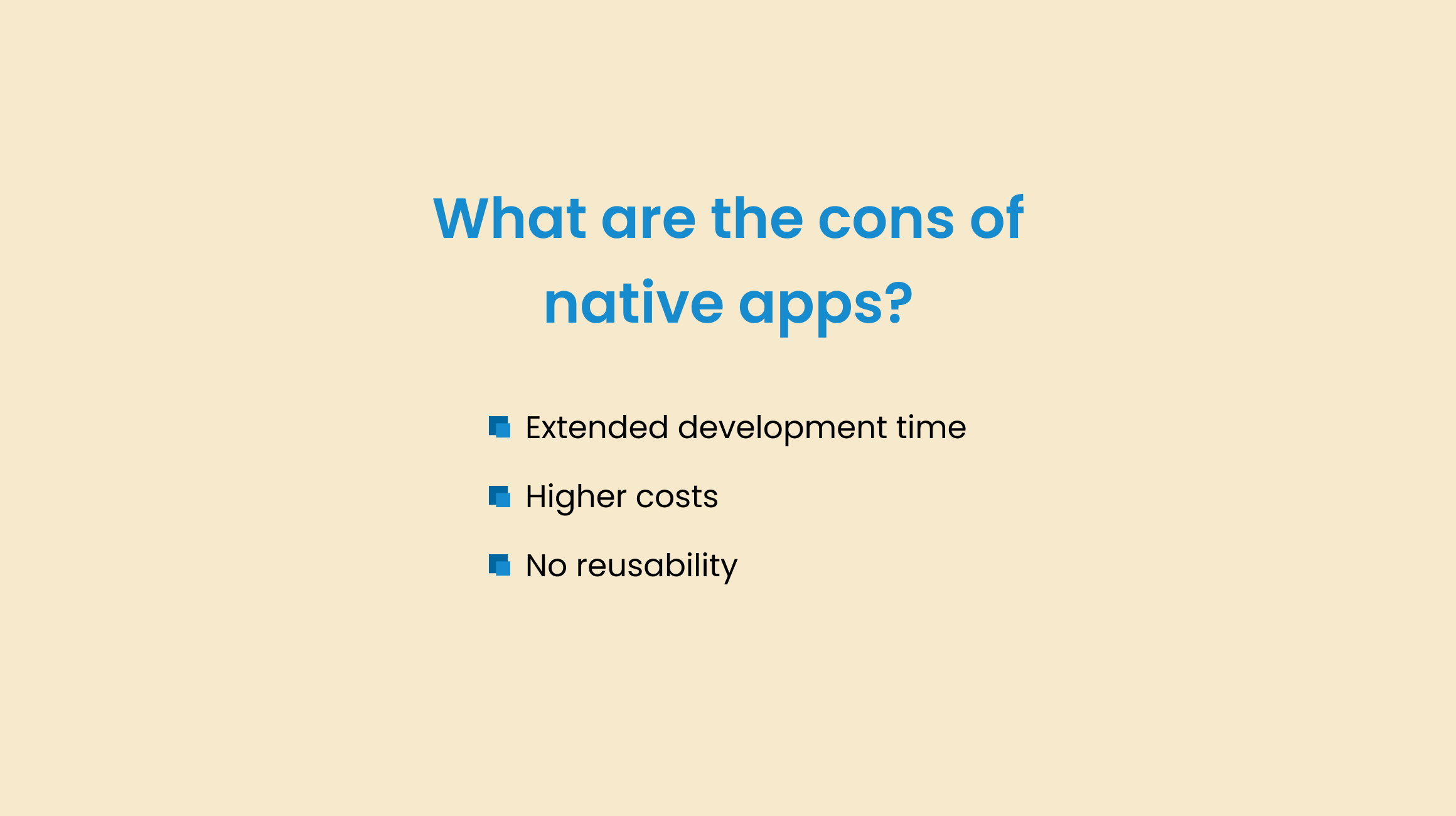 If you want to create a native app but still cover two platforms, you will have to create two separate codebases. This will significantly increase the development time since two codebases essentially means two separate apps.

Since development time is increased, so are the costs. If you want to create a native app but still cover two platforms, you will have to hire a separate team to work on each version of the app. There are also fewer developers who code in native languages, so their rates are usually higher. And don’t forget about maintenance costs. These are higher for native apps too.

All native development tools are tied to one platform, so you cannot reuse the same code for another platform. Every feature and update must be doubled in the other codebase with its own native toolsets.

As we already mentioned, the toolsets for native development differ depending on the platform. The following are some of the most common technologies.

Even though cross-platform development is growing in popularity, a lot of well-known companies continue to use a native development approach for their mobile apps. Here are some of the most prominent examples. 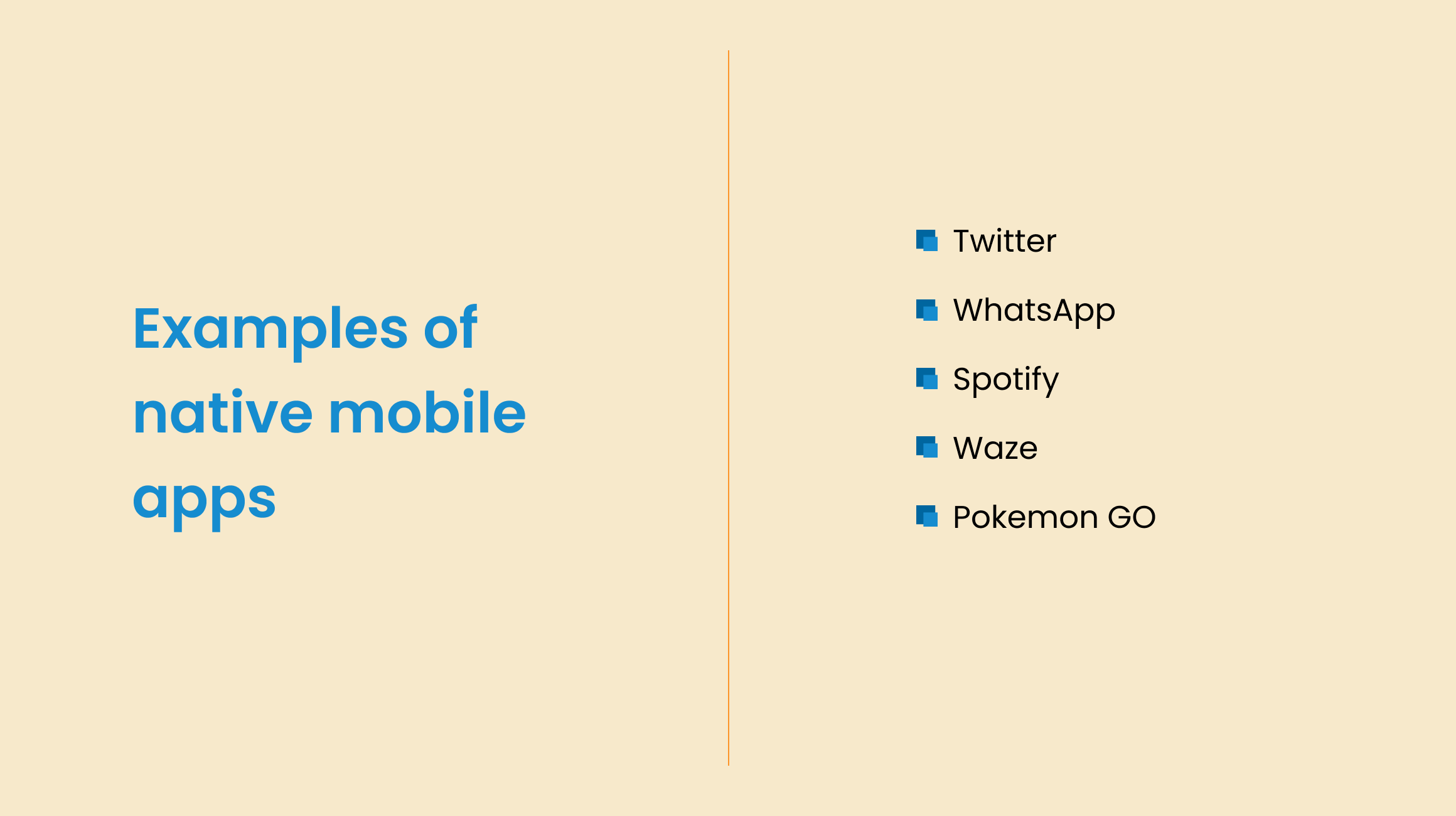 What is cross-platform mobile app development?

You can probably guess what this means. Unlike native apps, cross-platform solutions are created to be compatible with multiple platforms and operating systems at once. There is only one codebase that needs to be written and as a result, you get an app that runs on both iOS and Android. 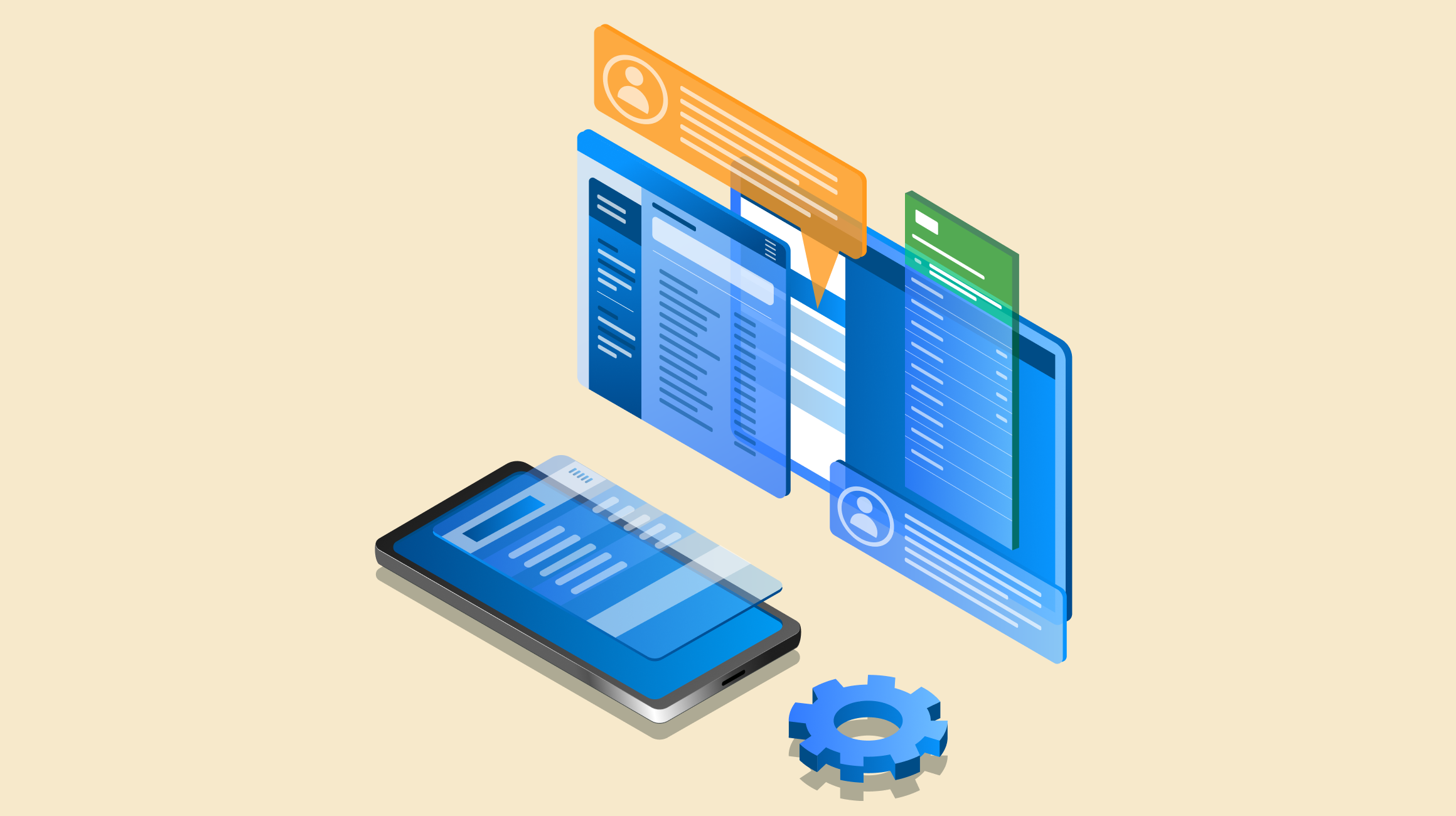 Usually, this approach is preferred by startups since it allows them to spend less time on development and get to market faster. However, in the long run, cross-platform apps can lack in both quality and scalability. Let’s talk in detail about the advantages and disadvantages of cross-platform development.

Here are several reasons you might opt for cross-platform development. 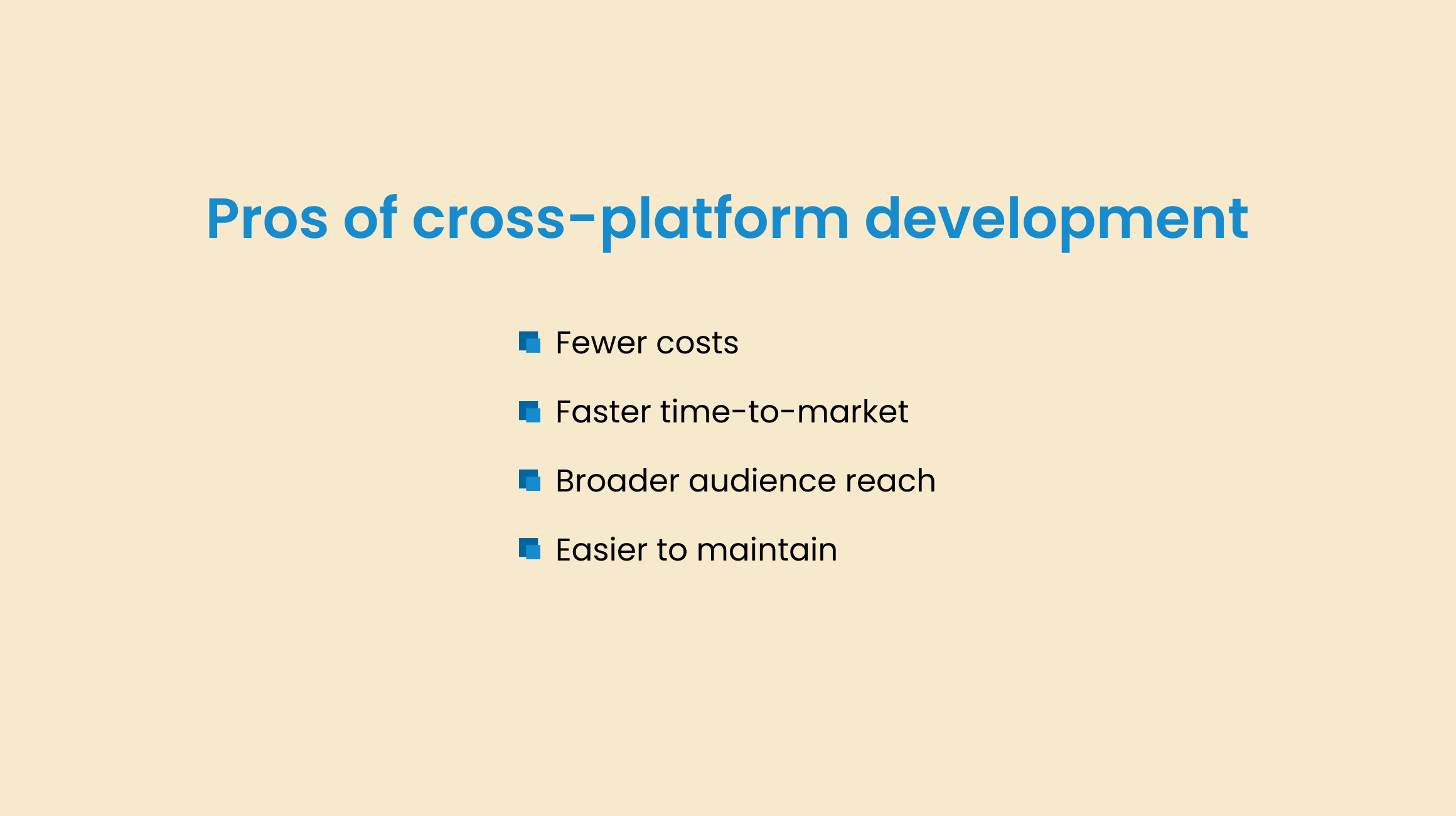 As we already mentioned, a cross-platform app requires only one codebase to function on multiple platforms. This means that you need only one team to create functional code that can be released everywhere. As a result, you will spend less money on the development team than you would with native development.

A lower budget is not the only benefit of a single codebase. You also have a good chance to get to the market faster than competitors using native development. Since there is no need to write additional source code for another OS, cross-platform applications are usually ready for release faster than the native ones.

If you have one native app for each platform, they have to be updated separately with their respective tools. Cross-platform development allows you to make changes and apply updates nearly simultaneously over all platforms. This reduces the efforts your team needs to put into maintenance work.

To make an informed decision about your development approach, you should also be aware of the disadvantages of creating a cross-platform app. 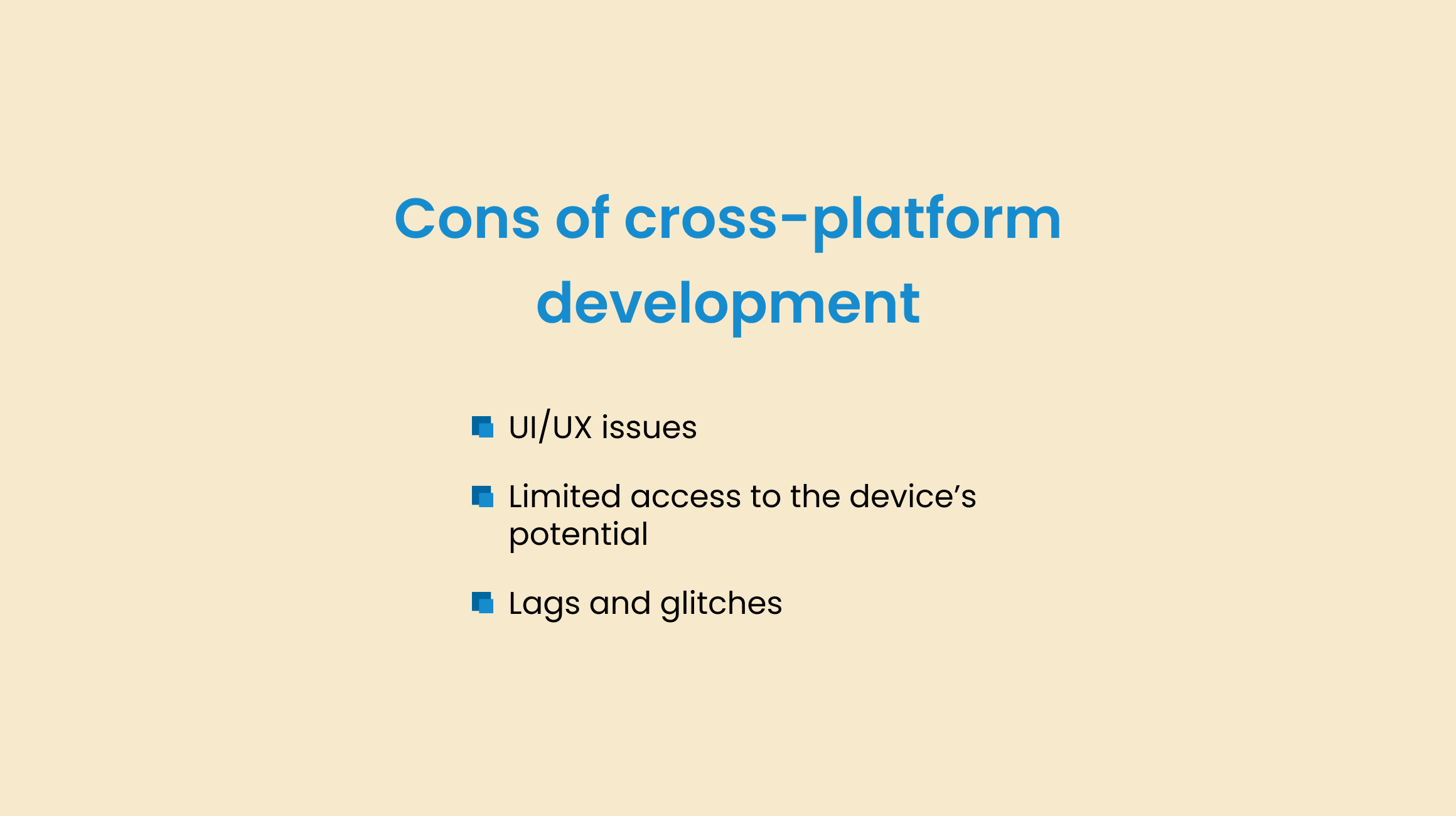 It’s possible that cross-platform UX will not be able to provide users with functionality that maximizes the full potential of their devices. This happens because native-only components are not available for cross-platform applications. In addition, cross-platform UI design can have some issues when displayed on unusual screens.

User experience is not the only aspect that can turn out worse in cross-platform apps than in native ones. Cross-platform tools may have trouble accessing device functions like cameras, microphones, or GPS. If your app needs to use these functions, native development may be a better option.

Unfortunately, cross-platform apps can’t connect as seamlessly with the platform they are released on as native apps. This can result in users facing various performance issues.

Here is a list of the most common cross-platform tools that are trusted by many businesses and developers.

As mentioned above, several major companies have already chosen cross-platform development for their mobile applications. The most popular cross-platform apps that most of us use every day include the following. 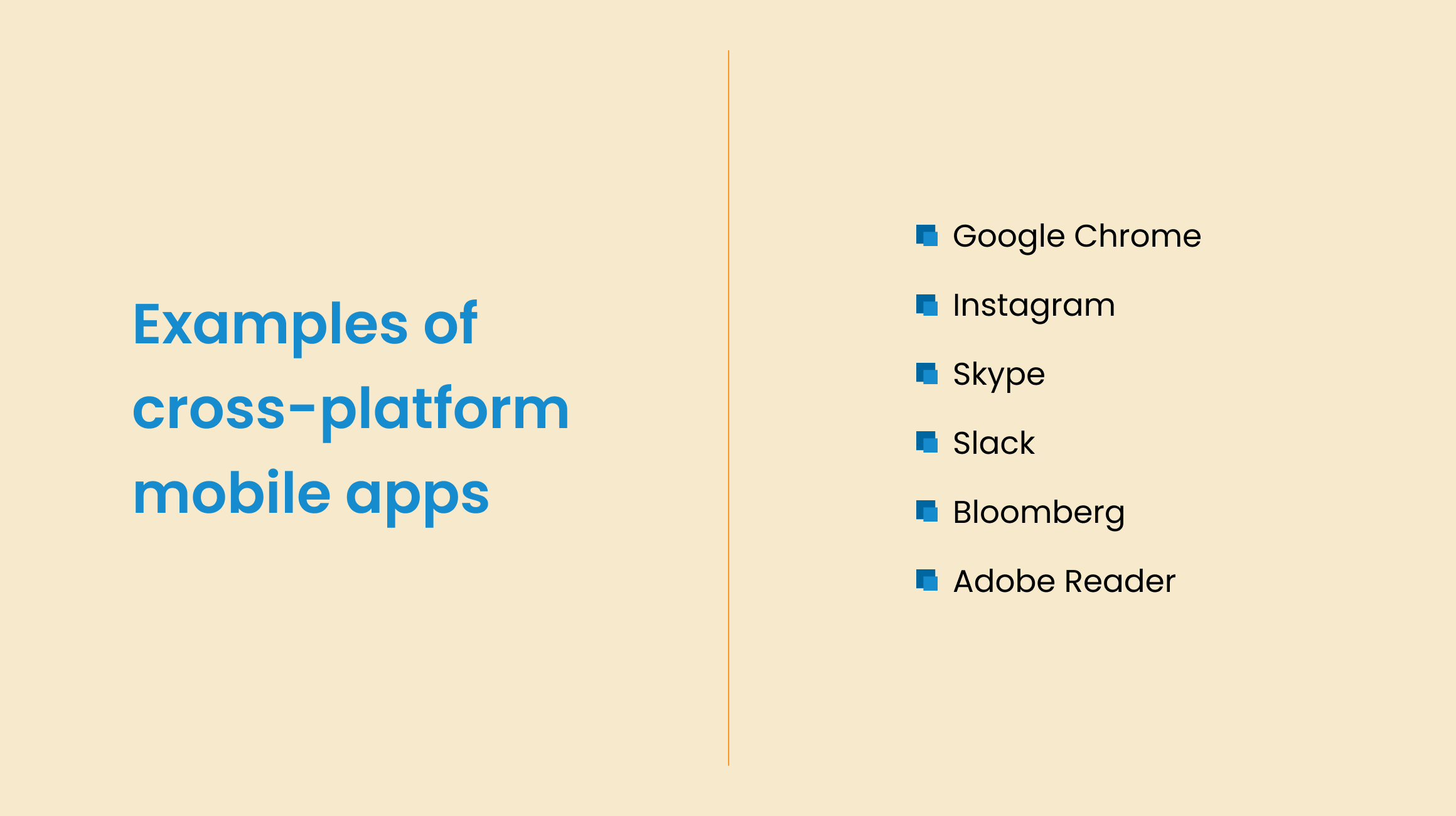 Native vs cross-platform mobile development: What and when to choose

Now that you know what to expect from both development approaches, here is a summary of the cross-platform vs native decision in a table format highlighting the most significant features of both options.

Summing it up: How to make the right choice

As you can see, both development approaches have their place. The comparison of cross-platform apps to native apps is also not always relevant, since each approach serves different business needs.

Native development is your best choice if you are planning to implement complex design solutions, your app will use device functionality like a camera or GPS, and your niche is established so you need to provide better performance and user experience from launch. However, note that it will cost more.

Cross-platform development will suit you better if you are a startup that needs to get its MVP to market quickly, you need to test the idea in the market, or your budget is insufficient for native development.

Here at Yellow, we will be happy to assist you with any app idea you may have. Feel free to contact our team to get an estimate for your project.

📱 What is native development?

Native development refers to an application that will function only on one specific platform. The tools and languages are specific to the platform so the app’s code cannot be used on other devices.

📱 What is cross-platform development?

Cross-platform development refers to apps developed to be compatible with multiple platforms and operating systems at once. These apps use a single codebase that will work on every platform.

📱 What approach will be more suitable for my project?

It depends on your business needs. If your main focus is better performance and user experience, you should choose native development. If you prioritize speed of development and lower costs, cross-platform development may be a better choice.

📱 Are there any alternatives?

Actually, yes. Another solution you can opt for is hybrid development. This approach combines elements of both the approaches covered in this article, aiming to combine the benefits of each of them. Feel free to contact our team for more information and we can help you decide if hybrid development is suitable for your project.

How Much Does It Cost to Develop a Website in 2022? (Pricing Guide)

AI in the Fintech Industry: How Both Companies and Clients Benefit

How to Create an App Like Yelp: What You Need to Know

Machine Learning in E-Commerce: The Future of Online Shopping

Get weekly updates on the newest design stories, case studies and tips right in your mailbox.

Got a project in mind?

Fill in this form orsend us an e-mail